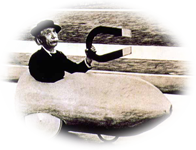 MOST OF THE PAGES ON THIS SITE ARE FAMILY FRIENDLY - SOME OF THIS SECTION IS MOST DEFINITELY NOT!

Although some of the images in this section are amusing there are images of dead people or animals. Some of the images are merely slightly disturbing others are just gross. You have been warned!

Since I started collecting postcards, I've come to realize that there is no subject that was considered out of bounds for putting on a postcard at one time or another. This is a collection of cards that I find groteqsque, bizarre, humourous, macabre, gross, surreal, weird, wacky, tacky or just unusual.

Some of these postcards have images of subjects that most people will find very distasteful. There are several arguments as to why I've included them. The first is that this is a collection of bzarre and grotesque postcards - so what did you expect?

The second is that at the time most of these cards were produced they were a legitimate method of disseminating news and the events of the day. For example, there were thousands of postcards produced depicting the floods of 1913, some which included images of some of the thousands of horses and other animals that were drowned, and even some of the people that lost their lives.

Postcards are also historical documents in their own right. Not only do they show actual events but they also reflect the changes in society. Can you remember the raunchy humourous postcards that adorned every seaside resort but which are now considered non-PC?

Wars are fought for a variety of reasons and almost without exception all sides believe they are doing the "right" thing. Unfortunately, once the flag-waving and jingoism have been left behind a lot of people are going to die and some of the postcards in this section remind us all of that.

Having said all of the above, this collection includes some very interesting postcards and I hope you enjoy them for what they are and maybe make you think about the events they depict.