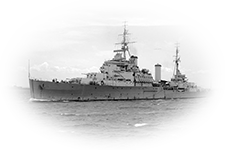 There is a far more comprehensive site about HMS Gambia that I also write.

These pages were started in 1999 and were originally of the photos from my dad's photo albums. I started getting information from other people and that was also included. In 2003, Bill Hartland of the HMS Gambia Association contacted me about helping to start their own site. The site that Bill put together disappeared in 2014, so in 2016, I decided to remake it.

"Dad's Navy Days" is still being updated but anything new about HMS Gambia, unless it concerns the content already here, is being added to the HMS Gambia site.