She was an experimental aircraft carrier in that several innovatations were tried out on her. Bill Owens who served on her on a commission before my father's emailed me in March 2009 that "she was fitted with a rubber deck which was laid on a 'nest' of air hoses so that the first generation jet planes - without undercarriages - could land on. Some did, others skidded overboard. We came to the salute and sailed over them. The experiment went on for some time until one crashed into the Island and the designers went back to the drawing board."

She acted as the headquarters ship for the atom bomb tests on Malden Island known as Operation Grapple in 1957 and 1958.but was sold to Argentina as ARA Independencia in 1958. Commissioned 26th January 1959, she was in service with them till stricken from Argentinean Navy list in 1971 when she was scrapped.

I know a lot less about HMS Warrior than I do about another of dad's ships, HMS Gambia, so I am always grateful in anything anyone can tell me about her.

In August 2019, I received an email from Gavin who lives in the Falklands. Gavin came across an article "from a person who remembers being on board HMS Warrior as a child when she visited the Falklands some time between (they think) 1956 and 1958. They think this was after nuclear tests at Christmas Island and I believe that a Falkland Islander may even have been given passage on her back to the UK for a hip operation."

Does anyone know about this?

These pictures had been on the page for almost 20 years and it was a bit of shock to get a message from "Steve F" in December 2018, that some of them had been wrongly captioned. Steve said that the deck letters on the photos did not match the name I gave to the ship.

Deck letters were first used when aircraft carriers started to operate together, such as in the British Pacific Fleet (BPF), during WWII as an aid to identify which carrier returning planes were landing on. The letters were also painted on the tails of the planes belonging to a particular ship.

Two good sources of information about the deck letters are the Wings Aviation website (website now gone and not in the Internet Archive) by Michael E. Fader and Appendix F of British Aircraft Carriers: Design, Development & Service Histories (page 376) by David Hobbs.

The deck identification letters did change on some of the carriers over the years, but the above two sources do not agree as to when the ones of HMS Warrior changed.

Then there's photos of HMS Warrior during Operation Grapple in 1957, such as the one on Maritime Quest, which shows Warrior with the J.

HMS Warrior and Eagle deck letters from the sources

The confusion might have been from the area of operations of the ships. Warrior spent a lot of her time in the North Pacific and Eagle was usually assigned to the Atlantic. With all the letters of the alphabet to choose from it does seem strange that the Royal Navy used the same deck letter for both ships.

It is confusing as it seems the ones of Warrior did change over time, especially during deck refits, but the photos on this site really are of the Colossus class HMS Warrior and not the Audacious class HMS Eagle.

In March 2005, Len Hillier sent me some information about the above photos featuring Gothic...

A book, "HMS Warrior Far East Tour 1953/54" was printed (part way through the tour) at Hong Kong 28th September 1954. I was a National Serviceman. I was in 825 Squadron (Air Mechanic Airframes) Fairy Fireflies, the other Squadron was 811 Sea Furies. The Air Branch was called (by the real salty sailors) "The Bloody Birdmen" while we called the seamen "Fishheads"

On Monday 26th April 1954, the Liner Gothic (with HM The Queen on board) escorted by HMS Newfoundland and three Pakistan frigates was on its way to Aden from a tour of Australia &New Zealand. Both our squadrons did a low level fly pass at 200feet. Later on after landing the squadrons back on board, we turned and overtook the Gothic and steamed past at 200yds. The lower deck was cleared with every possible man was on deck, nearly a thousand men fell in three deep all round the flight deck with the Royal Marine band in the bows, we could see HM the Queen and the Duke of Edinburgh, three mighty cheers rang out, and the signal flags for "long live the queen" were hoisted. Warrior steamed ahead to part company. A few minutes later a radio message was received "Thank you for your message , you looked very smart" Best wishes for a happy commission. Soon after we received the instruction to "Splice the Mainbrace", an issue of extra rum/grog (watered down rum) The above direct quote from the "book".

1954 began with new communist offensives menacing South Vietnam, central and northern Laos, and the northeast of Cambodia. On May 8, 1954, the French base at Dien Bien Phu suffered a major defeat after a heavy artillery attack. The French forces in North Vietnam evacuated to below the 16th parallel. Bao Dai wished to lead the country with the support of the United States, but a referendum held in October decided to uphold Ngo Dinh Diem. Bao Dai was deposed on October 26, 1955, marking the end of the Nguyen Dynasty and the beginning of the Republic of South Vietnam.

The war for independence officially ended on July 20, 1954, after the long negotiations in Geneva. In finally gaining full national independence, Vietnam lost its unity. The Geneva agreement signed in August 1954, divided the country at the 17th parallel pending general elections previewed for the middle of 1956. The North became the Democratic Republic of Vietnam under the leadership of the Lao Dong party and the South became the Republic of South Vietnam. In April 1956 the last French troops left Vietnam.

The above extract is from VWAM - Vietnam History and Educational Site

In the wake of the French defeat at the Battle of Dien Bien Phu, the Geneva Accords of 1954 decided the fate of French Indochina after eight years of war between French Union forces and the Viet Minh, which fought Vietnamese independence. The accords resulted in the partition of Vietnam at the 17th parallel north, with Ho Chi Minh's communist Viet Minh in control of the north and the French-backed State of Vietnam in the south. The agreements allowed a 300-day period of grace, ending on May 18, 1955, in which people could move freely between the two Vietnams before the border was sealed. - Wikipedia

The United States Navy helped transport 310,000 Vietnamese refugees south in Operation Passage to Freedom. The French, British, and other nations moved another 500,000.

This is HMS Warrior's part in the evacuation known as the Thaiphong (Vietnam) Evacuation (31 August - 15 September, 1954). A total of 3,188 refugees were taken in two journeys South from Haipong to Cap Saint-Jacques (now Vũng Tàu) in South Vietnam.

There are two figures of the number of refugees taken by HMS Warrior. The figure of 3,188 is taken from one of HMS Warrior's 'seatime' postcards. The Presidential Citation gives the figure as 3,221. 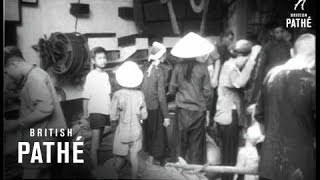 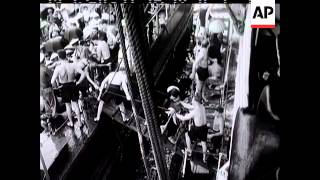 Tony Pearce in his email of November 2000 wrote "Imagine what it felt like when looking through your pictures suddenly to see the one of the "Battle Honours" which I painted 46 years ago. This was to celebrate the birth of three babies on the journey from Haiphong down to Saigon and was displayed on the side of the ship's island as we went into Hong Kong." Another ex-Warrior sailor, Brian Graham Taylor also remembers these "Battle Honours".

In February 2004, I received an email from Gareth Knott. The birth of his father on 19th May 1954, is represented by one of the storks. Gareth's grandfather, Ken Knott served on board Warrior for most of that year.

When a ship 'Crosses the Line' it signals the start of ceremonial practical jokes. Those who have not crossed the Equator before are summoned before the Court of Neptune. Neptune was the Roman god of the sea, equivilent to the Greek god Poseidon. He is usually depicted as a bearded elderly man of stately stature carrying a trident, usually seated on a throne but also seen astride a dolphin or a horse.

Once before Neptune the supplicants are sometimes ducked by bears, roughly lathered and shaved. This is now usually a good humoured affair but in times gone by the horse play was supposed to be a bit rough on the participants.

As far as I know this is now only carried out when Crossing the Equator but was formerly carried out crossing the 39th parallel, going through the Straits of Gibraltar and rounding the Cape of Good Hope.

A Proclamation
To Whom It May Concern

Whereas we give this as a Royal Patent to certify
that B. H. Gott
this day visited Our Royal Domain on board Her Britannic
Majesty's Ship Warrior and has received the ancient initiation
and rite necessary to become one of Our Loyal Subjects...
Should he at any time fall overboard we recommend all Sharks,
Dolphins and Denizens of the Deep under Our commnd to
refrain from eating, plying with or otherwise maltreating him.
We further direct all Masters, Mates, Matelots, Marines
and Mariners to treat him with the respect due to one who has
visited Us. In longitude 90 52' W
this 30th day of November 1954
Neptunus Rex

Note from Ray - The Navy issued rum until "Black Tot Day", on 30th July 1970. For a history of grog in the RN see the Contemplator's site. In the early 90's, whilst serving in the army, after a joint exercise with the navy a few of us were invited to their mess, where we took a long and deep interest in Pusser's. An interesting evening, followed by a monumental hangover.